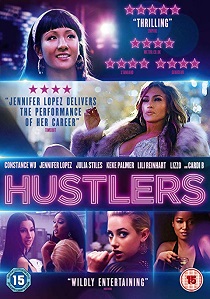 Inspired by the provocative true story about a crew of former strip club employees who turn the tables on their greedy Wall Street clients, Hustlers, arrives on Blu-ray and DVD 20th January 2020 from Sony Pictures Home Entertainment.

Inspired by journalist Jessica Pressler's 2015 viral New York Magazine article The Hustlers at Scores, Hustlers is filled with wildly entertaining and empowering moments from beginning to end and takes audiences behind the scenes of this inspiring real life con.

Hustlers is and written and directed by Lorene Scafaria (Seeking a Friend for the End of the World, Nick and Norah's Infinite Playlist), and produced by Jessica Elbaum (Booksmart), Elaine Goldsmith-Thomas (Second Act), Lopez (Second Act), Benny Medina (The Boy Next Door), Will Ferrell (Vice) and Adam McKay (Vice).

Hustlers follows Destiny (Constance Wu) a young stripper struggling to make ends meet. That is, until she meets Ramona (Jennifer Lopez), the club's savvy top earner, who shows her the way toward making big bucks. But when the 2008 economic collapse hits their Wall Street clientele hard, Destiny and Ramona concoct a plan with their fellow strippers to turn the tables on these greedy power players. It's a wild, modern-day Robin Hood tale.

3D-BD
The grave course of events set in motion by Thanos that wiped out half the universe and fractured the Avengers ranks compels the remaining Avengers to take one final stand in Marvel Studios', Avengers ... END_OF_DOCUMENT_TOKEN_TO_BE_REPLACED
Hot PicksView