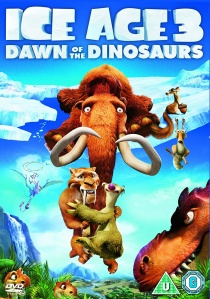 Twentieth Century Fox are delighted to announce Simon Pegg (How to Lose Friends and Alienate People, Hot Fuzz), as the voice behind Buck the newest addition to the Ice Age herd. Ice Age 3: Dawn Of The Dinosaurs the third film in the Ice Age franchise will be released on DVD and Blu-Ray from 23rd November 2009.

Simon Pegg said of his latest role; "It's been a blast bringing Buck to life. I thoroughly enjoyed the first two films, so it was a real treat to become part of the Ice Age family in Ice Age 3: Dawn Of The Dinosaurs. What's more I get to be in 3D!"

Buck is a larger than life, swashbuckling one eyed weasel who helps Manny and the group navigate the world of the dinosaurs. Buck used to live above ground but accidentally fell into the mysterious land beneath the Ice Age where he had a terrifying encounter with an albino Baryonyx dinosaur named Rudy. In the fight, Buck lost an eye but took Rudy's tooth, which he now carries with him. Since that moment, like Moby Dick's Captain Ahab, Buck has lived on his own and has devoted his life to seeking his revenge on Rudy.

Ice Age 3: Dawn Of The Dinosaurs is the latest installment to the hit Ice Age franchise, which has grossed more than $1.2 billion around the world. Ice Age 3: Dawn Of The Dinosaurs will be directed by Oscar-nominated Carlos Saldanha, who directed Ice Age 2 and co-directed Ice Age. The film is being produced by Academy Award-winning Blue Sky Studios, the creative force behind all the Ice Age films as well as Horton Hears A Who.