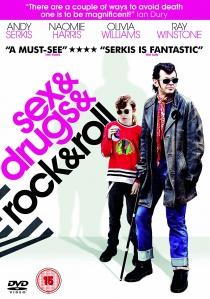 For more than a decade Dury together with his band The Blockheads was one of the most singular and compelling figures in British pop music with a string of hits that included the song from which the film takes its title.

Dury had a difficult and tortuous life due to being partially crippled by polio from the age of seven and the release of Sex & Drugs & Rock & Roll co-incides with the tenth anniversary of his untimely death from cancer at the age of 57.

Joining Serkis (Lord of the Rings, King Kong, Einstein & Eddington, Longford) in the impressive cast line-up are Naomie Harris (Pirates of the Caribbean, 28 Days Later) as his girlfriend Denise; Ray Winstone (Beowulf, The Departed, Sexy Beast) in the role of Dury's father Bill; Olivia Williams (An Education, The Sixth Sense, Rushmore) as his first wife Betty; Bill Milner (Son of Rambow, Skellig, Is Anybody There) as his son Baxter; and Tom Hughes (Cemetery Junction) as his songwriting collaborator and musical director Chaz Jankel.

The film portrays Dury as a driven man who was determined to succeed despite his disabilities. It charts his rags to riches rise to fame against all the odds and the effect his success has on other areas of his life and in particular on his relationships. Not surprisingly, his home life is revealed to be chaotic. As his son was being born in an upstairs bedroom, Dury is acrimoniously rehearsing in the living room with his first band, Kilburn and the High Roads.

Soon after the birth, he leaves his wife (Olivia Williams) and starts a relationship with a fan (Naomie Harris) before a chance meeting with guitarist Chaz Jankel (Tom Hughes) who is widely credited with unlocking Dury's jazzy, funky, pub-rock genius. His painful rise to stardom is interspersed with childhood memories of a brutal polio hospital, presided over by a tyrannical doctor (Toby Jones), and bittersweet thoughts of his dignified old dad (Ray Winstone).

Serkis appears in almost every frame of the film and his ferocious energy powers it irresistibly along and is a major factor in making Sex & Drugs & Rock & Roll a fitting tribute to one of the most successful and charismatic musicians of his generation.

BD
With a mission of building from scratch an entirely new race car with the potential to defeat Ferrari at the 1966 Le Mans World Championship, att Damon and Christian Bale star in Le Mans '66,released ... END_OF_DOCUMENT_TOKEN_TO_BE_REPLACED
Hot PicksView