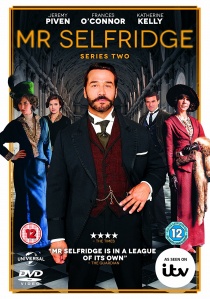 Based upon the life of American businessman Mr. Selfridge, who founded the world renowned store on London's Oxford Street in 1909, the second season picks up the story in 1914 as the store celebrates its fifth anniversary of trading.

As the grand finale, the smash hit ITV Studios drama is available to download and own prior to broadcast three days before the broadcast of each episode on ITV. New episodes of the second season of Mr. Selfridge are available to download before the complete season is available on Blu-ray and DVD from 24th March 2014. Each of the 10 episodes is available, in both HD and SD, on iTunes on the Thursday each week prior to broadcast on Sunday for the run of the entire series and can be viewed on all iOS devices. The Electronic Sell-Through (EST) agreement marks the first time ITV Studios Global Entertainment has agreed a deal for an entire series run on iTunes pre-broadcast.

Harry Gordon Selfridge (Jeremy Piven) is proud of the store's success but there is no time to rest on his laurels. With talk of war in Europe, he prepares staff for challenging times ahead. The store must play its own part in the war effort and help keep morale high on the home front.

Now more than ever Harry needs his wife, Rose (Frances O'Connor) by his side; but over the course of the last five years, the couple has become increasingly estranged. With Rose spending long periods of time in America with their daughters, and their son Gordon attending school in Winchester, Harry is left to live the life of a single man in London.

Pull back the curtains and open the iconic doors as Mr Selfridge Series 2 arrives on Blu-ray and DVD on 24th March 2014, courtesy of Universal Pictures (UK).

DVD
Starring Chris Evans, Snowpiercer, the post-apocalyptic ice age thriller set on a train that travels around the globe, is released on DVD and Blu-ray 25th May 2020 from Lionsgate Home Entertainment. END_OF_DOCUMENT_TOKEN_TO_BE_REPLACED
Hot PicksView