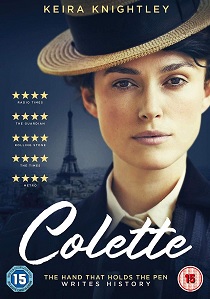 Based on the inspiring true story, Colette, released on DVD and Blu-ray 6th May 2019 from Lionsgate Home Entertainment, is an entertaining and compelling biopic about an independent and forward-thinking woman who overcomes her controlling husband and cultural mores to pursue her artistic and dramatic desires.

Unconventional country girl Sidonie-Gabrielle Colette has married a charismatic egomaniacal man of letters, 14 years her senior, known by the single name, Willy. Through his auspices, Colette is introduced into the fecund world of the artistic demimonde in Paris where her creative appetite is sparked. Ever quick to capitalise on talent, Willy permits Colette to write her novels only if she does so in his name.

The phenomenal success of her Claudine series makes Willy a famous writer and Colette and Willy the first modern celebrity couple. Although they are the toast of the town, lack of recognition for her work begins to gnaw on Colette. Their marriage starts to internally combust, fuelled by Willy's infidelities and Colette's growing interest in women - particularly her relationship with the gender-defying Missy - but emotionally and artistically, she cannot break free of him. On a downward slide, Willy resorts to increasingly desperate measures to pay his debts and sabotage his wife but Colette is developing resources of her own.

Set at the dawn of the modern age, Colette is the story of a woman who has been denied her voice by an overbearing man, and who goes to extraordinary lengths to find it; a battle of the sexes at the very beginning of the modern age, when seismic shifts were taking place in the roles of men and women.

More than a century after the publication of her first novel, Colette is still one of the best-selling, and beloved, French authors. Unfortunately, because Willy convinced her to ghostwrite for him, she doesn't get any of the credit for the phenomenon that her novel becomes. And in the years to come, while her and Willy's adventures become the talk of Paris, she defies everyone to get her name on the books she writes.

Related Articles
Money Monster, Tomb Raider, The Affair: Season 3, Revolting Rhymes, Money Monster, The Wire: The Complete Series, Testament of Youth, The Hour: Series 2, The Awakening, The Hour, 300, 28 Days, Chicago, Les Miserables
Channel Zero: Season One Candle Cove, The Hippopotamus, Inside No. 9: Series 3, The Tree Of Life: The Criterion Collection, Killing Eve: Season 1, Mrs Wilson, Killing Eve: Series 2
Poldark: Series 3, Alleycats, Poldark: Series 1, Angus, Thongs And Perfect Snogging, The War of the Worlds, Ordeal By Innocence
Seeking a Friend for the End of the World, Collateral Beauty, Everest, The Imitation Game, Begin Again, Jack Ryan: Shadow Recruit, Seeking a Friend for the End of the World, A Dangerous Method, Last Night, London Boulevard, The Duchess, Pirates of the Caribbean: At World's End, A Dangerous Method, Pirates of the Caribbean: The Curse of the Black Pearl, The Nutcracker and the Four Realms, The Aftermath, Official Secrets
Still Alice
What Remains, Juliet, Naked, The Kid Who Would Be King
Comments
UHD Releases News Pick

UHD
Following the global success of Godzilla and Kong: Skull Island comes the next chapter in the cinematic Monsterverse in Godzilla II: King of the Monsters, arriving on DVD, Blu-ray and 4K UHD 7th ... END_OF_DOCUMENT_TOKEN_TO_BE_REPLACED
Hot PicksView