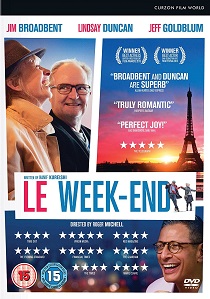 Nick and Meg, a married couple in their late-50s (played by Jim Broadbent and BIFA Best Actress winner Lindsay Duncan), are on a weekend trip to Paris to celebrate their anniversary and rekindle the flame. Things don't quite seem to be going to plan when home truths, broken dreams and financial realities begin to surface, but you never can tell what will happen in the City of Light...