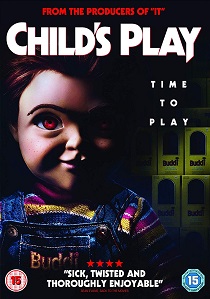 Chucky - the classic killer doll and horror icon - gets a 21st century upgrade in this critically acclaimed, razor sharp horror-comedy. Gruesome, creepy, and with a great cast - including Mark Hamill as the voice of the Buddi doll Chucky - Child's Play is bloody good fun and charged with electric, retro cool

After moving to a new neighbourhood, single mom Karen (Aubrey Plaza; TV's Parks & Recreation, Ingrid Goes West, Dirty Grandpa) tries to encourage her son Andy (Gabriel Bateman) to make friends by buying him a Buddi doll - the very latest in toy technology. But Andy's doll and new best pal - which Andy names Chucky (voiced by Mark Hamill; Star Wars, Village of the Damned, Batman: The Animated Series) - has a glitch that allows it to think, act, and feel. But as Andy meets new kids in the neighbourhood, how long before Chucky's possessive friendship turns into a gruesome killer doll rampage?!

For fans of old school slasher horror, Child's Play is like a knife plunged straight into the nostalgic pleasure zones. But the all-new Child's Play is wickedly smart too. Chucky gets an upgrade in every way possible. He's hardwired with plenty of heart, and he's fully smart and WiFi-ready, which takes the horror - and hilarity - into new tech-savvy territory.

When it's funny, it's very funny, and when it's gruesome, it's very, very gruesome. There's creepy, knife-edge tension as director Lars Klevberg cranks up the scares, and gore-hounds will go crazy for some of the most inventive and gut-churning - not to mention gut spilling - set-pieces in modern horror.

And it's not just the doll that come to life, but the entire movie, thanks to a stellar cast that find the perfect balance between laughs and scares. Mark Hamill is one of the all-time great villain voice actors, following his work as The Joker in the Batman animated series. And Hamill continues his career resurgence by bringing eerie pathos and menace to Chucky. Aubrey Plaza lends her trademark sardonic comedy style and Gabriel Bateman proves he's a talent to watch as Chucky's reluctant best pal Andy. Brian Tyree Henry is also on point ahead of his role in Marvel's upcoming blockbuster Eternals.

Released on DVD and Blu-ray 21st October 2019 from Universal Pictures (UK), you won't want to miss out on the all-new Child's Play - it's killer stuff!

BD
You ever hear the one about the cop, the blonde, the psycho and the mafia princess? Birds Of Prey And the Fantabulous Emancipation of One Harley Quinn, coming to DVD, Blu-ray and 4K UHD 20th June 2020 ... END_OF_DOCUMENT_TOKEN_TO_BE_REPLACED
Hot PicksView