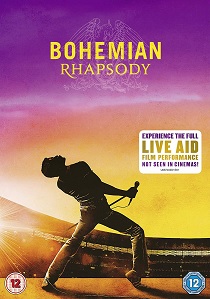 Fans can experience the story behind the band and the making of Bohemian Rhapsody, the #1 streamed song of the 20th century and other favourites like We Will Rock You, Somebody to Love, We are the Champions and more, for a music adventure that will make you laugh, sing, dance and cry.

Bohemian Rhapsody is an enthralling celebration of Queen, their music, and their extraordinary lead singer Freddie Mercury (Malek), who defied stereotypes and convention to become one of history's most beloved entertainers. Following Queen's meteoric rise, their revolutionary sound and Freddie's solo career, the film also chronicles the band's reunion, and one of the greatest performances in rock history.

For the first time, fans can experience a truly one-of-a-kind music movie event with the complete "Live Aid" Movie Performance featuring two never-before-seen songs (Crazy Little Thing Called Love and We Will Rock You) packed into a 22-minute collective experience recreating the original event. In addition, on Blu-ray, fans will get a look behind the making of the film including interviews with Queen, the cast and creative team.

DVD
From the 1870s through to modern day, Radioactive, released on DVD 27th July 2020 from StudioCanal, is a journey through Marie Curie's enduring legacies - her passionate partnerships, scientific ... END_OF_DOCUMENT_TOKEN_TO_BE_REPLACED
Hot PicksView