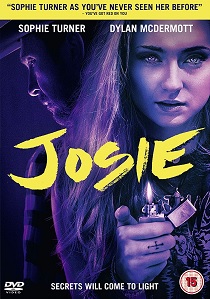 Haunted by disturbing visions and guilt from his past, frustrated at not being able to get close to Josie, and driven to jealousy when she starts seeing her classmate Marcus (Kilmer), Hank's simmering obsession with the teenager starts to boil over.

Sansa Stark ditches the braided hair and heavy robes for a bleach blonde look and cut off denims, as Game of Thrones star Sophie Turner takes the title role of the gum-chewing, tattooed high school student who bewitches a small town loser in Josie. Turner is perfectly cast and irresistible as the girl whose arrival in a small town turns it upside down.

American Horror Story's Dylan McDermott is excellent as the world-weary, downtrodden Hank, a solitary man who works as a school parking monitor and has pet tortoises for company. The cast also includes screen stalwart Kurt Fuller (Alias) as a nosy neighbour, and Val Kilmer's son Jack, oozing charisma and talent like his father, as Josie's classmate Marcus, Hank's number one enemy in town.

With a haunting Ry Cooder-esque score, and the seedy motel setting beautifully photographed by Zoe White (Handmaid's Tale, Catfight), England's slow-burning film takes some devilish twists before its gripping, painful and wholly unexpected climax. Smartly made, atmospheric, and loaded with impending doom, Josie, released on DVD 14th January 2019 from Altitude Film Entertainment, is a taut, terrific thriller with a real sting in its tail.

DVD
Inspired by a shocking true story, Dark Waters, released on DVD 6th July 2020 from Entertainment One, tells the shocking and heroic story of an attorney who risks his career and family to uncover a ... END_OF_DOCUMENT_TOKEN_TO_BE_REPLACED
Hot PicksView