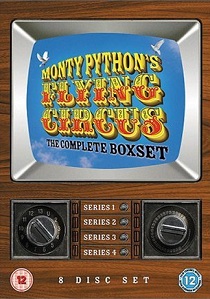 The ground-breaking and utterly hilarious Monty Python team are back this month with all four series of TV's Monty Python's Flying Circus available for the first time in one comprehensive box set. This definitive release is available to buy on DVD from 3rd November 2008, courtesy of Sony Pictures Home Entertainment.

The surreal British comedy which revolutionised television and was truly 'something completely different' stars the iconic comic actors John Cleese, Michael Palin, Eric Idle, Graham Chapman, Terry Gilliam and Terry Jones in the roles that made turned all of them into national treasures and some of the best loved comic talent the UK has ever produced. Full of hilarious, memorable sketches -- including The Lumberjack Song, The Fish-slapping Dance, The Funniest Joke in the World and The Dead Parrot Sketch - Monty Python's Flying Circus Complete Series 1-4 Box Set is a benchmark of British comedy.

What's more, the collection also has some spectacular extras, including two brand new featurettes. Packed with exclusive interviews with the Pythons and other comic luminaries, home movies and footage of early sketches, Before the Flying Circus reveals the performances that influenced the Pythons-to-be, as well as their process of finding the creative voice that would one day repeat the word 'Spam' more times than anyone would care to hear.

The long and winding road to success in the U.S. is recounted in Monty Python Conquers America through exclusive interviews with those who helped make it happen, along with the U.S. comedy and entertainment stars influenced by Monty Python, including Judd Apatow, Hank Azaria, David Hyde Pierce, Trey Parker and Luke Wilson. The Box Set also features Politically Incorrect, a controversial never-before-seen deleted scene that was removed by the BBC for fear that it would affect the election taking place at the time of the original broadcast.

UHD
In Yesterday, released on DVD, Blu-ray and 4K UHD 4th November 2019 from Universal Pictures (UK), a struggling musician realises he's the only person on Earth who can remember The Beatles after waking ... END_OF_DOCUMENT_TOKEN_TO_BE_REPLACED
Hot PicksView