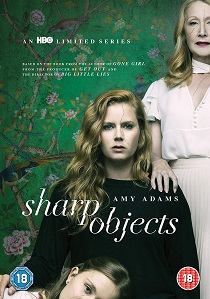 Starring five-time Oscar®-nominee Amy Adams (Arrival), the "haunting and riveting" (The Hollywood Reporter) series is directed by Jean-Marc Vallée (HBO's Big Little Lies) and created by Marti Noxon (Dietland). The Digital Download, Blu-ray and DVD will include an exclusive, never-before-seen feature showcasing the creation of the fictional town of Wind Gap.

Set in a small town in southern Missouri, Sharp Objects follows troubled journalist Camille Preaker (Adams) as she returns home to investigate the murder of a preteen girl and the disappearance of another. Trying to put together a psychological puzzle from her past, she finds herself identifying with the young victims a bit too closely.

Related Articles
Maze Runner: The Death Cure, The Party, The East, Friends With Benefits, Easy A, Elegy, Married Life, All The King's Men, Duplicate, Out Of Blue
Live by Night, Manglehorn, Damages: Season 4, Julie & Julia, Made of Honour
Arrival, Nocturnal Animals, Batman v Superman: Dawn of Justice, Lullaby, Big Eyes, Her, American Hustle, Man of Steel, On The Road, The Muppets, The Fighter, Julie & Julia, Night at the Museum 2, Miss Pettigrew Lives for a Day, Standing Still, Catch Me If You Can, Catch Me If You Can, Serving Sara, Arrival, Vice
Mission: Impossible, Ready or Not, Ready Or Not
Little Women
Comments
DVD Releases News Pick

DVD
Inspired by a shocking true story, Dark Waters, released on DVD 6th July 2020 from Entertainment One, tells the shocking and heroic story of an attorney who risks his career and family to uncover a ... END_OF_DOCUMENT_TOKEN_TO_BE_REPLACED
Hot PicksView