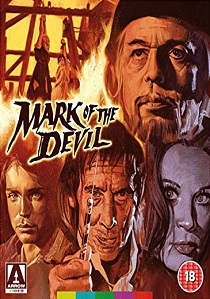 Once proclaimed as "positively the most horrifying film ever made", Mark of the Devil finally arrives uncut in the UK on Dual Format Blu-ray + DVD from 4th August 2014, courtesy of Arrow Films.

A bloody and brutal critique of religious corruption, Mark of the Devil sees horror icon Udo Kier (Flesh for Frankenstein, Suspiria) play a witchfinder's apprentice whose faith in his master (Herbert Lom) becomes severely tested when they settle in an Austrian village. Presided over by the sadistic albino (a memorably nasty turn from Reggie Nalder), the film presents its morality not so much in shades of grey as shades of black.

Written and directed by Michael Armstrong, who would later pen Eskimo Nell, The Black Panther and House of the Long Shadows, this classic shocker has lost none of its power over the years - especially now that British audiences can finally see it in one piece.