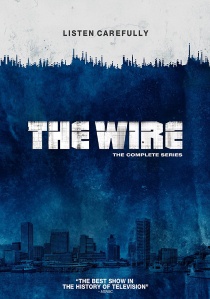 Hailed as one of the best and most original series on television in decades, The Wire: The Complete Series is to be released for the first time ever in HD as a Blu-ray box set on 1st June 2015 from HBO Home Entertainment.

Relive one of the most original and most talked about TV shows ever in its full glory, as the entire series of this small-screen masterpiece from creator David Simon (Generation Kill, Treme) has been re-mastered in 16x9 Full-Frame HD from over 8,000 reels of original 35mm camera negative so you can now catch all the action on Blu-ray.

In addition, The Wire: The Complete Series is loaded with extra content and includes an BRAND-NEW feature - Paley Center for Media: The Wire Reunion, featuring a Q&A with cast and crew. Other fascinating bonus content includes audio commentaries with writer/creator David Simon, director Clarke Johnson and writer George Pelacanos, Q&A sessions with the cast and crew, and an hour long 'behind the scenes' documentary; this collection is an essential fix for any The Wire fan.

Viewed from the perspective of the principal characters - the police and their targets - The Wire captures a world where easy distinctions between good and evil, and crime and punishment are challenged at every turn. The series' first season concentrated on the often-futile efforts of police to infiltrate a West Baltimore drug ring.

Seasons Two and Three introduced new storylines as the drug investigation escalated, adding pressures on the working class and the city's political leadership to the city's mounting problems. Season Four explored the public school system against the backdrop of a new drug empire and mayor, while the Fifth and final season centered on the media's role in addressing or failing to address what was really going on in the city.

The Wire: The Complete Series is the must-have Blu-ray boxset for fans of both crime-drama and HBO series'. If you liked Boardwalk Empire, Generation Kill or The Sopranos, then this is definitely an essential addition to your collection.

The Wire: The Complete Series and the individual seasons are also all available now on Digital HD.

DVD
Adapted from the classic novel by Charles Dickens, The Personal History Of David Copperfield, released on DVD and Blu-ray 15th June 2020 from Lionsgate Home Entertainment, brings to life one of the ... END_OF_DOCUMENT_TOKEN_TO_BE_REPLACED
Hot PicksView