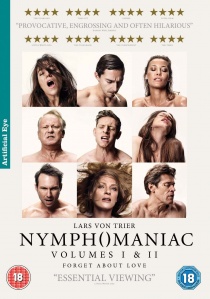 The new film from Lars von Trier (Melancholia, Antichrist), Nymphomaniac, released on DVD and Blu-ray on 28th April 2014 courtesy of Artificial Eye, is the wild and poetic story of a woman's journey from birth to the age of 50 as told by the main character, the self-diagnosed nymphomaniac, Joe.

Lars von Trier's bold, brilliant and controversial new film tells the story of Joe (played by Charlotte Gainsbourg & newcomer Stacy Martin), a self-diagnosed nymphomaniac, from birth to the age of 50.

One night, a gentle old bachelor named Seligman (Stellan Skarsgård) finds Joe beaten up in an alley. After taking her to his flat he cares for her wounds and questions her about her life, listening intently as, over the film's eight chapters, she recounts the lusty, labyrinthine story of her life...

BD
You ever hear the one about the cop, the blonde, the psycho and the mafia princess? Birds Of Prey And the Fantabulous Emancipation of One Harley Quinn, coming to DVD, Blu-ray and 4K UHD 20th June 2020 ... END_OF_DOCUMENT_TOKEN_TO_BE_REPLACED
Hot PicksView