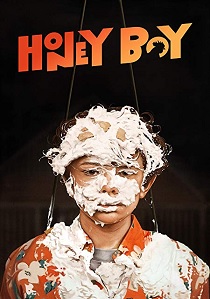 From a screenplay by Shia LaBeouf, based on his own experiences, award-winning filmmaker Alma Har'el brings to life a young actor's stormy childhood and early adult years in Honey Boy, available to Download and Keep on 30th March 2020 from Sony Pictures Home Entertainment.

Starring Shia LaBeouf (The Peanut Butter Falcon), Lucas Hedges (Manchester By the Sea), Noah Jupe (A Quiet Place) and Natasha Lyonne (TV's Russian Doll), Har'el casts Noah Jupe and Oscar® nominee Lucas Hedges as Otis Lort, navigating different stages in a frenetic career. LaBeouf takes on the daring and therapeutic challenge of playing a version of his own father, an ex-rodeo clown and a felon.

When 12-year-old Otis starts to find success as a child television star in Hollywood, his ex-rodeo-clown father returns to serve as his guardian. When Otis isn't on set charming audiences, he spends his days with his father at an extended-stay motel on the edge of the city, enduring his overbearing father's abuse.

Honey Boy follows two threads of time, watching father and son's contentious relationship and their attempts to mend it across the course of a decade. This stunning collaboration between screenwriter/star Shia LaBeouf and director Alma Har'el paints a painful yet inspired portrait of growing up.

LaBeouf's script dives deep into Otis's psychology to mine uncomfortable truths about the lasting effects of abuse, while Har'el crafts an exciting, stylish film that never loses sight of its warm, heartfelt centre. Two outstanding young actors, Lucas Hedges and Noah Jupe, play Otis at different ages, and their intense performances reveal an emotionally raw character driven, simultaneously and paradoxically, by anger and the desire to forgive.

3D-BD
The surviving members of the resistance face the First Order once again, and the legendary conflict between the Jedi and the Sith reaches its peak as Star Wars: The Rise of Skywalker is released on ... END_OF_DOCUMENT_TOKEN_TO_BE_REPLACED
Hot PicksView