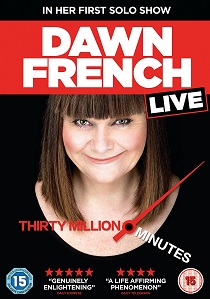 The evidence is there for all to see. She is already three quarters certifiably daft. The other quarter is utterly bewildered. And the remaining quarter simply can't do maths. With a sharp eye for comic detail and a wicked ear for the absurdities of life, this is a true Christmas treat to see the critically acclaimed comedian at her finest.

Filmed during its final West End run in October 2016, it tells the story of Dawn's 30 million minutes on earth - and counting. It takes the audience on a journey through various delights and riches, with the odd irksome tribulation thrown in, as Dawn speaks about the lessons life has taught her and the things she knows to be true. Cancer scares, her father's suicide, and romantic relationships are all explored.

DVD
You ever hear the one about the cop, the blonde, the psycho and the mafia princess? Birds Of Prey And the Fantabulous Emancipation of One Harley Quinn, coming to DVD, Blu-ray and 4K UHD 20th June 2020 ... END_OF_DOCUMENT_TOKEN_TO_BE_REPLACED
Hot PicksView