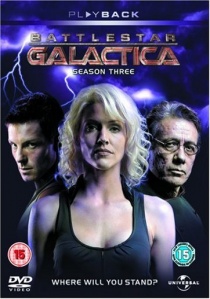 Arguably Battlestar Galactica's most explosive season yet, Season Three of this ever more popular series is being released on DVD for the first time in the UK, and indeed the world, on 3rd September 2007, courtesy of Universal Playback.

After the previous season's election of President Baltar, season three begins with sabotage on a grand scale as Duck plans a suicide mission to infiltrate the crowd at a happy Police squad graduation ceremony, where he detonates a bomb, and himself.

Standout episodes include Unfinished Business where the reason for the rift between Kara and Lee is explained, and we are able to take a look at the events that took place during the year-long gap from the storyline in the Season two finale.

Providing continuous commentary on real life war and politics, this series continues to draw parallels between the fictional world of occupied space, and the realities of war that we all face today.

Not short on guest starts, this season features Amanda Plumber as Oracle Selloi as well as Brad Dryborough as Hoshi and the sexy Lucy Lawless as D'Anna Biers.

The boxset also includes the bonus disc - The Story So Far - a 40 minute featurette catch-up of seasons 1 and 2 for anyone in need of memory refresh before getting stuck in to the thrills and spectacle of this exciting third season.

So, with so much action packed into one boxset, you'll want to be the first in the world to see this spectacular, thrilling season on DVD - available to own from all good retailers.