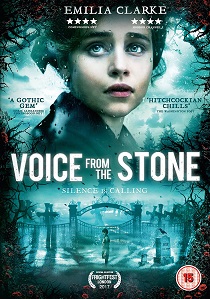 Emilia Clarke (Games Of Thrones, Terminator Genisys) and Marton Csokas (The Lord Of The Rings, The Bourne Supremacy) swap swords and dragons for ghostly goings-on in 1950s Italy, in Voice From The Stone, released on DVD 28th August 2017 from Precision Pictures.

Set in 1950s Tuscany, a determined young nurse and teacher, Verena, takes a job looking after Jakob, a young boy who has not spoken since his mother died. An expert at dealing with traumatised children, she tries to draw him out. Encountering resistance from both Jakob's father Klaus, and the boy himself, Verena digs deeper into the mystery of his silence, and discovers a dark family secret, hidden behind the walls of the family castle. She also finds herself irresistibly drawn towards Klaus, who sees something of his late wife in the beautiful nurse.

Beautifully filmed and elegantly scored, Voice From The Stone is an expertly produced and exquisite horror thriller in the vein of gothic masterpieces such as The Others, Rebecca and The Woman In Black.