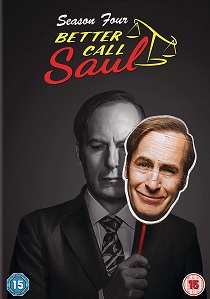 In the critically acclaimed show's fourth season, the death of Jimmy McGill's brother catalyses his transformation into the bigger-than-life legal legend Saul Goodman. Now, Jimmy steps into the criminal world, putting his future as a lawyer - and his relationship with Kim Wexler - in deep jeopardy.

Better Call Saul: Season Four contains all ten episodes in three-disc Blu-ray and DVD sets. The Blu-ray and DVD collections include cast & crew audio commentaries on every episode, a gag reel, and the featurette Slippin' Kimmy, which explores the complex character Kim Wexler, whose personal and professional triumphs are threatened by the temptation to cut corners, Slippin' Jimmy-style. Also included are ten Madrigal Security Training Videos with Mike Ehrmantraut and the short film No Picnic featuring fan-favourite characters, The Kettlemans.

Blu-ray exclusive content includes seven deleted scenes, three storyboard scene comparisons, a directorial walk-through, and two featurettes: Flashing Forward, Looking Back, which highlights the show's use of non-linear storytelling to explore the many layers of Jimmy's transformation, and Constructing the Superlab, which takes an in-depth look at the process of building Gus Fring's Superlab both on and off-screen.

BD
When an alien with amazing powers crash-lands near Mossy Bottom Farm, Shaun the Sheep goes on a mission to shepherd the intergalactic visitor home before a sinister organisation can capture her as A ... END_OF_DOCUMENT_TOKEN_TO_BE_REPLACED
Hot PicksView

DVDBD
25/03/2020
Released on DVD and Blu-ray 25th May 2020 from Sony Pictures Home Entertainment, writer-director Greta Gerwig crafts a Little Women that draws on both the classic novel and the writings of Louisa May ...