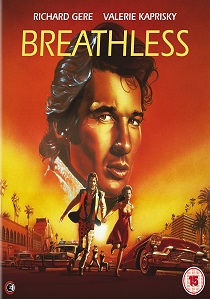 Hollywood legend Richard Gere and acclaimed actress Valérie Kaprisky make a power couple in Jim McBride's (The Big Easy) Breathless, an intoxicating remake of the 1960 French classic A Bout de Souffle. This stylish, sexy film has garnered a legion of fans including superstar director Quentin Tarantino and crashes on to UK Blu-ray for the first time ever courtesy of Second Sight.

Featuring brand new special features, this high-def edition includes an interview with leading lady Valérie Kaprisky and an insightful look at the film by renowned film expert Mark Kermode and arrives on Blu-ray on 26th March 2018.

Gere (An Officer and a Gentleman) stars as small-time crook Jesse Lujack, who becomes a fugitive after killing a cop in Las Vegas. Fleeing to Mexico he meets beautiful French student Monica (Kaprisky - La Femme Publique) and seduces her into coming along for the ride. But it isn't long before his crimes catch up with the pair and Monica must choose her fate.

This fun-packed thrill-ride will leave you breathless.