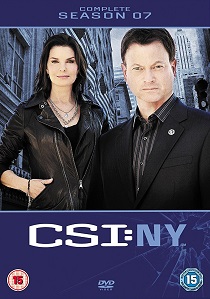 The New York CSI: Crime Scene Investigation department is back solving more complex and shocking crimes than ever before in CSI:NY The Complete Seventh Season coming to DVD 9th January 2012, courtesy of Momentum Pictures.

The New York CSI department welcomes a new member to the team in season seven; former FBI agent Jo Danville (Sela Ward) who is immediately in the line of fire when she stumbles over the body of a young woman who has been murdered within the NYPD crime lab.

Detective Mac Taylor (Gary Sinise) meets a desperate family in search of their missing son but has problems of his own as a hail of gunfire rips through the crime lab and he becomes part of a vendetta some 17 years in the making. Following frightening incidents and a near death experience, the seventh series sees Mac seriously re-evaluating his position as a CSI.

In the city that never sleeps the NY CSI team, like their counterparts in Las Vegas and Miami, know that people may lie, but the evidence never does.

CSI:NY, a crime drama inspired by CSI: Crime Scene Investigation is about forensic investigators who use high-tech science to follow the evidence and solve crimes in the Big Apple. As part of the number one Franchise in the world, all three series rank number one in their respective time periods and place in the top 10 of all drama series on U.S. television. Internationally, all three series of the CSI Franchise currently rank among the top 20 U.S. series in Australia, France, Germany, Italy, Spain and the United Kingdom. Each series in the Franchise is licensed in over 190 territories.

Det. Mac Taylor, a dedicated and driven crime-scene investigator who believes that everything is connected and everyone has a story, is a decorated Marine who served in Desert Storm and dabbled in war photography. The job is his life; he focuses on cases until they are solved.

The team includes Danny Messer, an investigator with an unflappable spirit and a troubled family history, which he uses on the job as he blends his own set of hybrid ethics. Messer was personally selected to join the team by Mac and he attempts daily to live up to that honour and responsibility. Sheldon Hawkes is the crime lab's former coroner, a brilliant Ph.D. who recently made the transition to the field team. Joining them is Don Flack, an edgy, hardcore homicide detective with a quick wit, impressive forensic insight and a long family history in law enforcement. Rounding out the team is Lindsay Monroe, a Montana native with intelligence, perseverance and a secret past.

UHD
Still reeling from the aftermath of Captain America: Civil War, Scott Lang is enlisted by Dr. Hank Pym for an urgent new mission in Ant-Man and the Wasp, released on DVD, Blu-ray, 3D Blu-ray and 4K ... END_OF_DOCUMENT_TOKEN_TO_BE_REPLACED
Hot PicksView