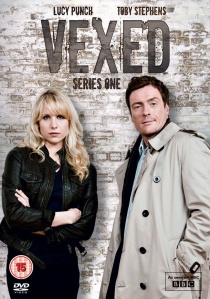 Written and created by Howard Overman (Misfits) and directed by the award-winning Matt Lipsy (Psychoville, Little Britain), Vexed takes a fresh approach to crime drama. Jack (Toby Stephens) is lazy, inefficient and disorganised, but carries it off with great charm. Police work isn't a vocation, it's a job. If he could think of something else to do, he might do it. Then again, he might not.

Kate (Lucy Punch) has transferred to the city to gain a promotion and to escape the feeling that she's stuck in a rut. She's determined to prove that she can do anything that Jack can and better.

BD
You ever hear the one about the cop, the blonde, the psycho and the mafia princess? Birds Of Prey And the Fantabulous Emancipation of One Harley Quinn, coming to DVD, Blu-ray and 4K UHD 20th June 2020 ... END_OF_DOCUMENT_TOKEN_TO_BE_REPLACED
Hot PicksView