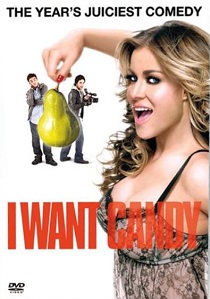 Newcomers Tom Riley and Tom Burke star as Joe and Baggy, two inventive students from Leatherhead who bite off more than they can chew whilst trying to make it big in the movie business. The two lads travel to London to sell their dynamite screenplay but, after trawling studios across London, their only ticket to Hollywood lies with seedy producer of adult movies and the boys soon find themselves changing more than just their script.

The boys are faced with an array of challenges, including casting the infamous Candy Fiveways, producing the film in the suburban setting of Joe's home whilst his parents are out and being threatened by the film's investors. The rigour of casting, filming and screening their film proves to be a little trickier than the boys could ever have imagined and their attempt makes for hilarious viewing.

Sharply scripted and brilliantly acted, I Want Candy is a sexy Brit flick that will keep boys and girls laughing this summer. Filled with never-before-seen DVD extras that delve behind the scenes, I Want Candy is a naughty but nice comedy that is guaranteed to win over audiences as it lands on DVD from 20th August.