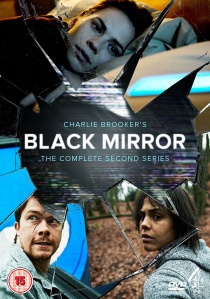 Thought provoking and original drama Black Mirror, created and written by multi-award winner Charlie Brooker is returning for a second series with three more twisted tales for 2013 out to own on DVD from 6th May 2013.

This darkly comic anthology series taps into the collective unease about the modern world. Each one hour story is in turn, disarming, suspenseful and darkly satirical and all explore our modern reality. The drama won a Golden Rose for comedy at the Rose D'Or festival and an Emmy for Best TV Mini-series in 2012.

Each self contained episode of Black Mirror will take you on a rollercoaster ride of emotions. Sometimes uncomfortable but always compelling, let this highly original drama take you into new depths of the future. Available to own on DVD from 6th May 2013.