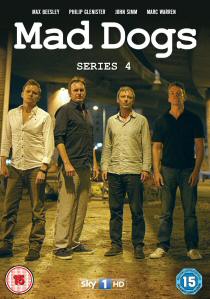 The boys are finally home as the brand-new series 4 of Mad Dogs is released on DVD from 13th January 2014, courtesy of 2entertain.

The final instalment of Mad Dogs promise a high energy finale with all four key cast members returning for one final send off. Woody, Quinn, Baxter and Rick only intended to go away for a long weekend in Mallorca. A labyrinthine nightmare saw them flee criminals in the Spanish Islands, imprisoned in a secret camp in Morocco and start new lives in South Africa.

Now the boys are back in London, but are they really that thrilled to be home? They're broke, their families have moved on and it's raining. So when Rick tells them he has a plan that might be worth two million euros each, they all stop and listen. A few months later and the boys are back in South Africa and life has changed - for the better. But when a dead goat is found floating in Quinn's swimming pool, they know that all is not well.

The brand-new series 4 of Mad Dogs will also be released as part of series 1-4 complete box set, enabling fans to own the entire series from start to finish.

DVD
Get lit in the stylish ensemble caper, The Gentlemen, a star-studded, sophisticated action-comedy written and directed by Guy Ritchie, released on DVD, Blu-ray and 4K UHD 27th April 2020 from ... END_OF_DOCUMENT_TOKEN_TO_BE_REPLACED
Hot PicksView