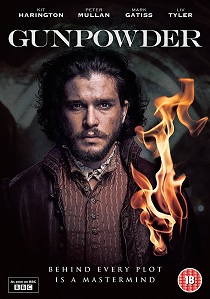 Gunpowder, released on DVD and Blu-ray 27th November 2017 from Spirit Entertainment, follows Catesby and his fellow conspirators as well as Robert Cecil (Gatiss), the king's spymaster-in-chief, whose network of informants pursued the plotters in a game of cat and mouse. The period piece is written by Ronan Bennett (Public Enemies) and directed by J. Blakeson (The 5th Wave). It was developed by Bennett, Harington and Daniel West.

The 5th November - The Gunpowder Plot! Whilst Guy Fawkes played a pivotal role, the man who dreamed up the plot and was its driving force was Robert Catesby (Harington), a 30-year old Warwickshire gentleman.

Catesby is a committed Catholic at a time when Protestant England persecutes Catholics relentlessly. The authorities directed by King James spymaster in Chief Robert Cecil (Gatiss), hunt down, torture and execute priests while lay Catholics are subject to oppression and the loss of their property. They must practice their religion in secret, risking imprisonment, fines, harassment and even death.

Catesby is unable to stand by while his fellow Catholics suffer, and despite the peaceful protestations of head Jesuit Father Garnet (Mullan), doing nothing is not an option for a man like Catesby. He starts to recruit friends and relatives, swearing them to secrecy as he devises an audacious plan. His astute and capable cousin Anne Vaux (Tyler) becomes suspicious about his activities and fears the consequences will be the exact opposite of what Catesby intends.

Related Articles
The Mercy, League of Gentlemen: Anniversary Specials, Doctor Who: Twice Upon A Time, Denial, Sherlock: Series 4, Sherlock: The Abominable Bride, Wolf Hall, Sherlock: Series 3, Sherlock: Series 2, Winnie the Pooh, Sherlock, The Wind in the Willows, Starter For 10, The League Of Gentlemen's Apocalypse, Sex Lives of the Potato Men, The Wind in the Willows, Christopher Robin, Christopher Robin, The Favourite
Borg Vs McEnroe, What Remains
Tommy's Honour, Sunset Song, Cargo, Sunshine on Leith, Top of the Lake, The Liability, The Man Inside, War Horse, Tyrannosaur, The Vanishing, Mum: Series 3
The Leftovers: Season 1, Robot & Frank, The Ledge, Super, The Strangers, Reign Over Me, Armageddon, The Lord of the Rings : The Fellowship of the Ring (Special Extended Edition), The Lord of the Rings : The Fellowship of the Ring, One Night at McCool's, Harlots: Series 2
Mine, 100 Streets, The Five, Knightfall: Season One
The 5th Wave, The Disappearance of Alice Creed
Comments
UHD Releases News Pick

UHD
Almost four decades after he drew first blood, Sylvester Stallone is back as John Rambo in a deadly journey of vengeance as Rambo: Last Blood is released on DVD, Blu-ray and 4K UHD 13th January 2020 ... END_OF_DOCUMENT_TOKEN_TO_BE_REPLACED
Hot PicksView