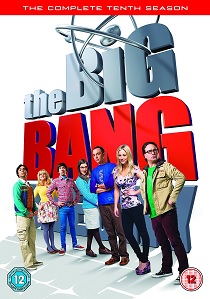 The Big Bang Theory continues to enthrall viewers and critics all over the world, averaging nearly 20 million viewers per episode! The Big Bang Theory: The Complete Tenth Season from Warner Brothers Home Entertainment includes all 24 episodes plus extras including three all-new featurettes, the 2016 Comic Con Panel and a hilarious gag reel.

Renewed by CBS for two more seasons, The Big Bang Theory: The Complete Tenth Season continues the saga of Leonard and Sheldon, two genius roommates who are brilliant in the lab, but socially challenged outside of it.

Last season, Leonard and Penny went from next-door neighbours to next-door newlyweds with a nuptial excursion to Vegas. This season, they find themselves in a repeating paradigm as they re-create their wedding - this time with family including Penny's mother (Katey Sagal) and brother (Jack McBrayer) and Leonard's parents (Christine Baranski & Judd Hirsch). Meanwhile, Sheldon and Amy move in together as part of an ongoing "cohabitation experiment." Also, gravitating in their universe, Howard and Bernadette prepare for the arrival of a little Wolowitz, while Raj finds himself juggling not one, but two girlfriends.

Prepare to test a new hypothesis of inspired comedy that's nothing short of genius as this hit series navigates its tenth dimension!

DVD
Based on the bestselling comic book, Vin Diesel stars as Ray Garrison, a soldier recently killed in action and brought back to life as the superhero Bloodshot, available 8th June 2020 from Sony ... END_OF_DOCUMENT_TOKEN_TO_BE_REPLACED
Hot PicksView