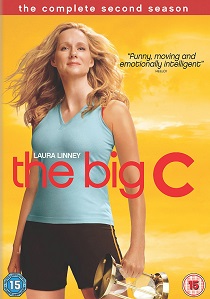 Laughter proves once again to be the best medicine when Sony Pictures Home Entertainment releases The Big C: The Complete Second Season on DVD on 20th August 2012.

The critically acclaimed Sony Pictures Television original series stars Laura Linney, Golden Globe® winner for her role as Cathy Jamison, a reserved suburban housewife who is diagnosed with stage four melanoma and opts to fight back through humour, sarcasm and some spontaneous choices along the way. The Big C also stars Oliver Platt (Frost/Nixon), John Benjamin Hickey (Transformers: Revenge of the Fallen) and Gabriel Basso (TV's The Middle). The second season's three-disc set will contain special features including deleted scenes and a gag reel.

Laura Linney returns in her Golden Globe®-winning role as Cathy Jamison in "The Big C". Following the medical diagnosis that rocked her safe world, Cathy finally shares the news with her family and decides to pursue experimental treatment. She quickly bonds with her fellow patient, Lee (Hugh Dancy) but isn't so sure about her new doctor (Alan Alda). Co-starring Oliver Platt and guest-starring Gabourey Sidibe, Cynthia Nixon and Parker Posey, this inspirational and bravely funny second season celebrates a life worth fighting for.