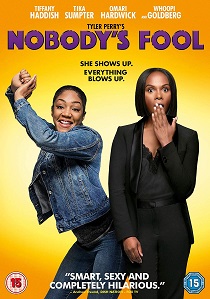 News Article Go back to homepage
In Nobody's Fool, released on DVD 18th March 2019 from Paramount Home Entertainment, a woman is released from prison and reunites with her sister, but she soon discovers that her sister is in an online relationship with a man who may not be what he seems.
Tiffany Haddish, Whoopi Goldberg, Omari Hardwick, Tika Sumpter, Amber Riley, Courtney Henggeler
Tyler Perry
Tyler Perry
Paramount Home Entertainment
1 hour 50 minutes
18/03/2019
#NobodysFool
Buy DVD
Information

Trying to get back on her feet, wild child Tanya (Tiffany Haddish) looks to her buttoned-up, by the book sister Danica (Tika Sumpter) to help her get back on track. As these polar opposites collide - with hilarious and sometimes disastrous results - Tanya discovers that Danica's picture-perfect life - including her mysterious boyfriend - may not be what it seems.

With the aid of her eccentric mother (comedy legend Whoopi Goldberg), Tanya will do whatever it takes to help... even if it means completely blowing up her sister's life! Omari Hardwick (Power) and Amber Riley (Glee) also star.

BD
Based on the global blockbuster videogame franchise from Sega, Sonic The Hedgehog, released on DVD, Blu-ray and 4K UHD from 8th June 2020 from Paramount Home Entertainment, tells the story of the ... END_OF_DOCUMENT_TOKEN_TO_BE_REPLACED
Hot PicksView