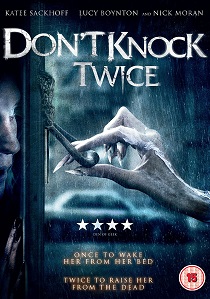 For Jess (Katee Sackhoff: TV's Battlestar Galactica, Oculus), life has never been better. A successful American sculptor, she has recently returned to the UK, where she spent much of her troubled youth. Now happily married, wealthy and settled, all that remains to make her life complete is to rebuild her relationship with Chloe (Lucy Boynton: Sing Street), the daughter she was forced to give up nine years ago.

But when Chloe agrees to come and live with her, Jess's optimism to make amends is soon crushed as her daughter is hiding a horrible secret... A supernatural curse has claimed the life of her boyfriend, Danny, and is now coming for her. Soon Jess comes to realise that she is all that stands between her daughter and the terrifying supernatural force. Thrown into a battle for survival, Jess must learn the truth behind the legend of the demonic witch and ultimately confront her...

Directed by Caradog W. James, the horror Don't Knock Twice is released on DVD by Signature Entertainment on 3rd April 2017.