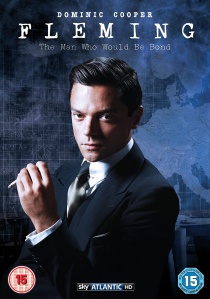 Fleming: The Man Who Would Be Bond, the captivating series that reveals the man behind James Bond is released on DVD on 10th March 2014 and is available to download to own from 4th April 2014.

The DVD release of this new original four-part drama, as seen on Sky Atlantic HD, stars Dominic Cooper (Captain America: The Winter Soldier) as Fleming, a charming and sophisticated maverick, whose pleasure-seeking life was turned around by WWII and led to the creation of the greatest spy the world has ever known - the legendary 007.

Set at the outbreak of WWII - mischievous playboy Ian Fleming is untroubled by the spectre of impending war - chasing women, collecting rare books and living off his family fortune. Forever in the shadow of his brother Peter (Rupert Evans, World Without End) and an eternal disappointment to his formidable mother Eve (Lesley Manville, Maleficent), Fleming dreams of becoming the 'ultimate' man - a hero, a lover, a brute and the one who always gets the girl. He is finally given some direction in his life when he's recruited by the Director of Naval Intelligence, Admiral John Godfrey (Samuel West, Mr Selfridge), to help in the effort against the Nazis. Suddenly, Fleming finds his chance to shine and prove his worth.

At first, Fleming's inclined to treat his new job in Naval Intelligence as a big adventure. But as he encounters the shocking consequences and challenges of war, he learns where his talents lie. With the somewhat sceptical support of tough-cookie Lieutenant Monday (Anna Chancellor, The Hour), Fleming's ability to spin a tale makes him a perfect fit for espionage and quickly takes him from pushing paper to stealing secrets.

While Bond fans will spot many a nod to the character James Bond, the DVD of Fleming is ultimately a gripping account of a playboy spy and the woman who won his heart.