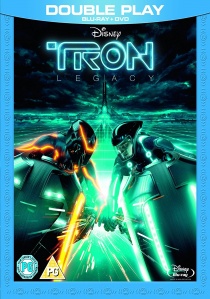 TRON: Legacy, the family action movie event of the year that takes home entertainment to breathtaking new heights, is soon available to buy on Disney 3D Blu-ray, Blu-ray and DVD from 18th April 2011.

The high octane sequel to the 1982 cult classic, TRON: Legacy tells the story of Sam Flynn (Garrett Hedlund), who when investigating a strange signal that appears to have been sent by his long lost dad, finds himself pulled into a digital world where his father Kevin (Jeff Bridges) has been stuck for 20 years.

With the aid of the fearless cyber warrior Quorra (Olivia Wilde), father and son embark on a life-or-death journey across The Grid - a virtual universe created by Kevin that has spiralled out of control, governed by a ruthless villain that aims to 'perfect' the real world and will do anything to prevent their escape.

Visually stunning fun for the whole family, the blu-ray release also features a wealth of exclusive bonus material including a sneak peek at upcoming animated series TRON: Uprising, insightful featurettes into the making of the movie, Installing the Legacy and Visualising TRON, and much more.

A non-stop thrill ride through a cyber landscape, TRON: Legacy is a film that has to be seen to be believed. Catch it first on Disney 3D Super Play, Blu-ray Double Play, VOD, or on digital download or DVD from 18th April 2011.

BD
Released on DVD and Blu-ray 27th July 2020 from Dazzler Media, created by visionary award-winning filmmaker of The Raid, Gangs of London takes audiences on an immersive journey into the hidden heart ... END_OF_DOCUMENT_TOKEN_TO_BE_REPLACED
Hot PicksView