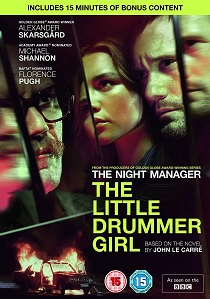 Brilliant young actress Charlie (Pugh) strikes up an acquaintance with an intriguing stranger while on holiday in Greece, but it rapidly becomes apparent that his intentions are far from romantic. The man is Becker (Skarsgård), an Israeli intelligence officer, who entangles her in a complex and high stakes plot orchestrated by Spymaster, Kurtz (Shannon). Set in the late 1970s yet sharply contemporary, The Little Drummer Girl weaves a dynamic and exciting story of espionage and international intrigue; of love and betrayal.

Joining the stellar line up are Michael Moshonov (The City and the City) as Litvak, Charif Ghattas (After the Ashes) as Khalil, Amir Khoury (Fauda) as Michel, Katharina Schüttler (Dogs of Berlin) as Helga, Simona Brown (Kiss Me First) as Rachel, Max Irons (Condor, Terminal, The Wife) plays Al and Charles Dance (And Then There Were None, Game of Thrones) steps into the role of Picton.

The six-part mini-series based on John le Carré's best-selling literary masterpiece of the same name has been adapted by Mike Lesslie (Macbeth) and Claire Wilson (Partners in Crime).

UHD
Following the global success of Godzilla and Kong: Skull Island comes the next chapter in the cinematic Monsterverse in Godzilla II: King of the Monsters, arriving on DVD, Blu-ray and 4K UHD 7th ... END_OF_DOCUMENT_TOKEN_TO_BE_REPLACED
Hot PicksView