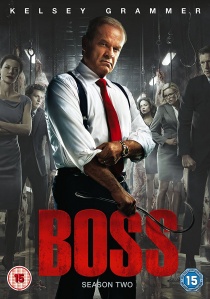 This gripping drama follows Mayor Tom Kane, the 'King of Chicago' as he rules his domain with an iron fist. Deception, scandal, and betrayal go hand in hand with Kane's form of politics. As long as he gets the job done, the people of Chicago look the other way. Despite being the most effective mayor in recent history, Kane is hiding a dark secret. A degenerative brain disorder is ripping everything away from him, and he can't trust his memory, his closest allies, or even himself.

As corrupt heads roll and his list of enemies grows, Kane's virtuous actions begin to erode the very foundation of power he's worked a lifetime to build. In order to maintain it, Kane must govern as he always has - ruthlessly. Watch as Kane viciously fights battles on all fronts in Boss: Season 2.

With outstanding performances from the returning cast including Connie Nielsen (Gladiator) and Hannah Ware (Oldboy), Boss: Season 2 and Boss Complete Season 1 & 2 are released on DVD on 30th June 2014.