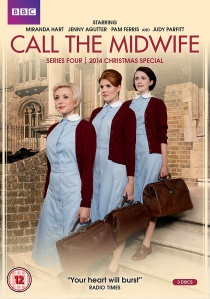 The smash hit series created by Heidi Thomas and inspired by the memoirs of Jennifer Worth, returns for the fourth series of Call The Midwife, released on DVD by BBC Worldwide on 9th March 2015.

The community prepares to enter a new decade - the 1960s. Nurse Cynthia embarks on a life-changing spiritual journey, Trixie receives a proposal from handsome young curate Tom Hereward, but tempers fray when she gets carried away with everything from the engagement party to wedding presents. Also an unexpected set of events sees Chummy take on a new challenge.

Elsewhere two new nurses join the team. Barbara, a vicar's daughter, played by new cast member Charlotte Richie, who is hard working and keen but also inexperienced and struggles to get to grips with the demands placed on her. Linda Bassett plays Nurse Phyliss Crane, who is older, wiser and a stickler for detail with lots of new ideas - not all of which meet the approval of Sister Evangelina.

Call The Midwife - Series 4 DVD release and the 1-4 boxset also include the 2014 Christmas Special plus behind- the-scenes interviews with cast and crew, making this the perfect Mother's Day gift.