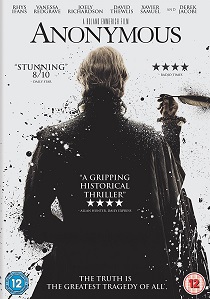 For centuries, great minds have questioned the true authorship of Shakespeare's plays. Now, movie fans can uncover the secret with one intriguing possible answer in this highly entertaining new film filled with political intrigue and illicit romance. Rhys Ifans (upcoming The Amazing Spider-Man, Notting Hill) stars alongside Academy Award® winner Vanessa Redgrave (Best Actress in a Supporting Role, Julia, 1977), Joely Richardson (The Girl with the Dragon Tattoo, TV's "The Tudors"), David Thewlis (Harry Potter series, War Horse) and Jamie Campbell Bower (The Twilight Saga: Breaking Dawn, TV's Camelot). Hailed by critics Anonymous arrives on Blu-ray and DVD packed with exciting bonus features that take viewers behind the curtain of this provocative film, including commentary with director Roland Emmerich and writer John Orloff and the making-of featurette "Who Is The Real William Shakespeare?". Exclusively available on the Blu-ray version are the additional behind-the-scenes featurettes "More Than Special Effects" and "Speak The Speech".

Prepare yourself for action and intrigue in this tense thriller from Roland Emmerich (2012, The Day After Tomorrow). Set in the tumultuous political snake-pit of the Elizabethan court, where greedy nobles vie for power and illicit romance goes hand in hand with cloak-and-dagger diplomacy, a secret of historic proportions is about to be revealed. Against the backdrop of the succession of Queen Elizabeth I and the Essex Rebellion against her, the question of whether Shakespeare wrote his plays will rock England to its very core. The drama has played out but the battle has only just begun...

Anonymous was written by John Orloff (Legend of the Guardians: The Owls of Ga'Hoole, A Mighty Heart). It was produced by Roland Emmerich, Larry Franco (2012, Batman Begins) and Robert Leger (Trade). Executive producers are Volker Engel (2012), Marc Weigert (2012) and John Orloff. 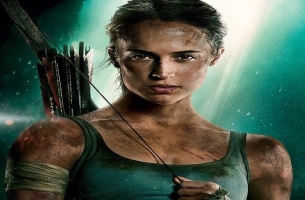