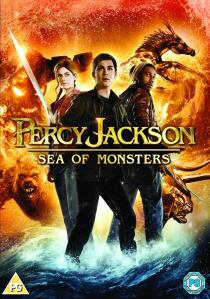 The demigods of Camp Half-Blood are once again led by Logan Lerman as Percy, the expected hero who embarks on his own, modern-day Odyssey. Alexandra Daddario returns to her role as Annabeth, the demigod offspring of Athena, goddess of wisdom. The original cast is joined by newcomers Douglas Smith as Percy's "monster" half-brother Tyson as well as the newest demigod Clarisse, played by Leven Rambin.

Out to prove he's not just a "one-quest wonder", Percy and his demigod friends embark on an epic journey into the treacherous Sea of Monsters, where they battle terrifying creatures, an army of zombies and the ultimate evil. With time running out, Percy must find and bring home the fabled Golden Fleece, which has the power to save his world...and save us all!

Audiences at home experience more of the film's action and scope with the Percy Jackson: Sea Of Monsters Blu-ray and DVD An all-new motion comic, available only on Blu-ray, extends Tyson's story. Developed with the film's director Thor Freudenthal this piece reveals how Percy's Cyclops brother came to Camp Half-Blood and where he got his iconic sunglasses! Hang behind-the-scenes with the cast through a trio of featurettes offering an insider's look of what life was like on set.

BD
Get lit in the stylish ensemble caper, The Gentlemen, a star-studded, sophisticated action-comedy written and directed by Guy Ritchie, released on DVD, Blu-ray and 4K UHD 27th April 2020 from ... END_OF_DOCUMENT_TOKEN_TO_BE_REPLACED
Hot PicksView