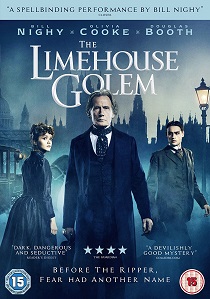 The tradition of serving up gothic terror at Christmas dates back to the 1800s and this year sees acclaimed chiller, The Limehouse Golem, enter the fray, arriving on Blu-ray and DVD 26th Decemeber 2017 courtesy of Lionsgate Home Entertainment.

Set on the unforgiving, squalid streets of Victorian London in 1880, our tale begins in the baroque, grandiose music hall where the capital's most renowned performer Dan Leno (Douglas Booth - Pride And Prejudice And Zombies, The Riot Club) takes to the stage. The whimsical thespian performs a monologue, informing his dedicated audience of the ghastly fate of a young woman who had once adorned this very stage, his dear friend Elizabeth Cree (Olivia Cooke - TV's The Secret Of Crickley Hall, The Quiet Ones, Ready Player One); for the beguiling songstress is facing up to her forthcoming death by hanging, having been accused of murdering her husband John Cree (Sam Reid - '71, Belle). Lizzie's death seems inevitable, until Detective Inspector John Kildare (Bill Nighy - Their Finest, The Best Exotic Marigold Hotel) is assigned to the case of the Limehouse Golem; a nefarious, calculating serial killer, whose unspeakable crimes involve murdering innocent, unconnected victims, leaving behind only their barely identifiable corpses and his distinctive signature in blood. All is not what it seems: everyone is a suspect, and everyone has a secret.

From the producer of Interview with a Vampire and also starring Daniel Mays (Rogue One: A Star Wars Story, TV's Line Of Duty) as Kildare's investigative sidekick and confidante, and Eddie Marsan (The Exception, Atomic Blonde) as theatre impresario 'Uncle', The Limehouse Golem is stunningly adapted from Peter Ackroyd's bestselling novel by screenwriter Jane Goldman (The Woman In Black, Kingsman: The Golden Circle) to blood-curdling effect, with director Juan Carlos Medina serving up the perfect antidote to the festive season's more saccharine excesses.

BD
Say the 'B' word three times and have a wonderful Day-O as Tim Burton's Beetlejuice arrives for the first time on 4K UHD 31st August 2020 from Warner Home Video. END_OF_DOCUMENT_TOKEN_TO_BE_REPLACED
Hot PicksView