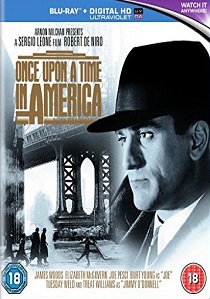 Once Upon A Time In America: Extended Director's Cut (1984)

Sergio Leone's original vision for his tour-de-force, Once Upon a Time in America (1984), will debut in the UK on 20th October 2014 with Warner Home Video Blu-ray and Digital HD with UltraViolet release of the Extended Director's Cut. This 251-minute cut was a restoration funded by The Film Foundation, the film preservation organization founded by Martin Scorsese, and its partner Gucci. The restored footage has been returned to the film three decades after its theatrical release, deepening the characters and enlarging the work of its astonishing cast: Robert De Niro and James Woods as lifelong pals and crime kingpins, Tuesday Weld, Joe Pesci, Jennifer Connelly, Elizabeth McGovern, Treat Williams and Louise Fletcher. The latter three are showcased in recovered scenes.

Sergio Leone, the Italian filmmaker whose artistic sensibilities created new interpretations of the American western with his landmark productions of The Good, The Bad and The Ugly, A Fistful of Dollars and For A Few Dollars More, and whose films brought international stardom to Clint Eastwood, crafts an unparalleled saga about two friends and the complex urban underworld in which they live.

Robert De Niro plays David Noodles Aaronson and James Woods is Max, a boyhood cohort with whom Max's life becomes inextricably meshed. Once Upon A Time In America follows Noodles and Max and their cadre of Jewish gangsters in New York from their childhood in the early 1900's, through the glory years of prohibition and the gang's subsequent reunion 35 years later. The film, chronicling the ruthless ambitions that drive the two friends, is a compelling story that embraces a world of gritty realities, raw emotions, secret longings, explosive conflicts, and the volatile passions that destroy them and those who love them.

3D-BD
The surviving members of the resistance face the First Order once again, and the legendary conflict between the Jedi and the Sith reaches its peak as Star Wars: The Rise of Skywalker is released on ... END_OF_DOCUMENT_TOKEN_TO_BE_REPLACED
Hot PicksView