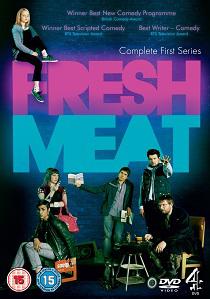 Channel 4's award winning comedy-drama about the hilarious and painful truths of being a student is being released on DVD for the first time. Winner of a British Comedy Award for Best New Comedy and two RTS Television Awards for Best Scripted Comedy and Best Writer - Comedy. Fresh Meat is created by Peep Show writers Sam Bain and Jesse Armstrong, Fresh Meat follows a group of six students embarking upon the most exciting period of their lives so far: university!

The laugh-out-loud comedy focuses on the experiences of this group as they each struggle to find a place for themselves in their new university environment. There are many surprises along the way... To his considerable bemusement, Kingsley manages to pull on his first night, but to his dismay finds the object of his attention is in fact recruiting for the Christian Union. Oregon wastes no time locking horns with her lecturer, Professor Shales (Tony Gardner), at her first English tutorial. And Josie ends up in bed with JP - a random encounter after which, to her horror, she realises he is in fact there to stay. Still, at least Howard is able to relinquish his outcast status - an accolade now awarded to the mysterious seventh housemate, Paul Lamb - "the invisible man"...

Away from home for the first time, on the brink of their adult lives, these six students see their lives collide, overlap and run the whole gamut of appalling behaviour and terrible errors of judgement familiar to anyone who's ever experienced this rite of passage for themselves.

3D-BD
Still reeling from the aftermath of Captain America: Civil War, Scott Lang is enlisted by Dr. Hank Pym for an urgent new mission in Ant-Man and the Wasp, released on DVD, Blu-ray, 3D Blu-ray and 4K ... END_OF_DOCUMENT_TOKEN_TO_BE_REPLACED
Hot PicksView