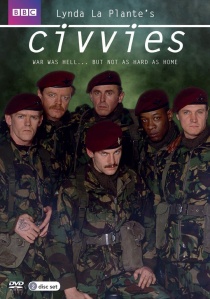 From Lynda La Plante comes a gripping BBC drama from the 1990s that resonates as powerfully today as ever. Civvies stars Jason Isaacs (Harry Potter) as Frank Dillon and Peter O'Toole (The Ruling Class) in the role of crime boss Barry Newman and comes to DVD on 3rd June 2013 as a two disc set, courtesy of Acorn Media.

Frank Dillon is retiring from the Army after 15 years with only £5,000, which won't last and the physical and psychological scars which will. He'd rather drink with the boys and go out looking for a fight than return home to the family he loves so much it hurts.

But what he and his mates have gone through, what they've seen, what they've done is something no one else will understand; and so they turn to each other - when the doors close, when the pubs open, when revenge is the answer, when the scars are healing.

From the acclaimed television dramatist famed for such series as Prime Suspect, Trial and Retribution and Above Suspicion, Civvies reflects Lynda La Plante's deep understanding of the human psyche and the terrible impact that war has on the men and women who must live with it.

Who knows whether they can avoid the darkness and stay in the light but all will be revealed as we see life in Civvies.