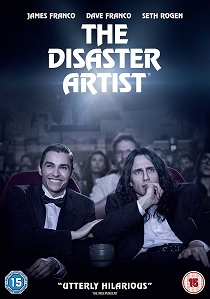 With The Disaster Artist, director James Franco (As I Lay Dying, Child of God) transforms the tragicomic true-story of aspiring filmmaker and infamous Hollywood outsider Tommy Wiseau-an artist whose passion was as sincere as his methods were questionable-into a celebration of friendship, artistic expression, and dreams pursued against insurmountable odds.

Based on Greg Sestero's best-selling tell-all about the making of Tommy's cult-classic "disasterpiece" The Room (The Greatest Bad Movie Ever Made), The Disaster Artist is a hilarious and welcome reminder that there is more than one way to become a legend-and no limit to what you can achieve when you have absolutely no idea what you're doing.

The Disaster Artist is released on DVD and Blu-ray 9th April 2018 from Warner Home Video.

Related Articles
Sausage Party, Homefront, Rise Of The Planet Of The Apes, The Deuce: Season 1, Queen of the Desert, Why Him?, True Deception, Wild Horses, Good People, The Interview, Forever Love, As I Lay Dying, Homefront, Obsessed, This Is The End, The Iceman, Spring Breakers, Oz, The Great and Powerful, Rise Of The Planet Of The Apes, Your Highness, 127 Hours, Pineapple Express, Spiderman 3, Spider-man, The Deuce: Season 2
The Lego Ninjago Movie, Nerve, Now You See Me 2, Bad Neighbours 2, Unfinished Business, Now You See Me, Warm Bodies, 21 Jump Street
Sausage Party, Sausage Party, Bad Neighbours 2, Kung Fu Panda 3, The Night Before, Steve Jobs, The Interview, Bad Neighbours, This Is The End, The Guilt Trip, Take This Waltz, 50/50, Kung Fu Panda 2, The Green Hornet, Funny People, Zack and Miri Make a Porno, Pineapple Express, Horton Hears a Who!, Superbad, Knocked Up, Knocked Up, Long Shot, The Lion King
Get A Job, How to Be Single, Sleeping With Other People, The Lego Movie, Community: Season 5, Community: Season 3, The Five Year Engagement, Community: Season 2, Community: The Complete First Season, The Lego Movie 2: The Second Part
The Sitter: Totally Irresponsible Edition, What's Your Number?, The Front Runner
As I Lay Dying, The Deuce: Season 2
Comments
UHD Releases News Pick

UHD
The ninth film from the writer-director Quentin Tarantino features a large ensemble cast and multiple storylines in a tribute to the final moments of Hollywood's golden age as Once Upon a Time... in ... END_OF_DOCUMENT_TOKEN_TO_BE_REPLACED
Hot PicksView