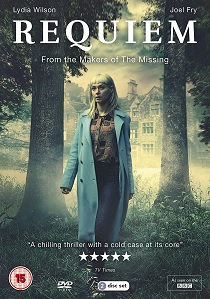 From the team behind The Missing comes Requiem a thrilling new psychological thriller with a difference. This taut psychological, supernatural thriller is set to air on the BBC and follows on DVD courtesy of Acorn Media International.

Matilda, hauntingly played by Lydia Wilson (Ripper Street) - is a young cellist whose life is suddenly turned upside down by her mother's inexplicable and devastating suicide. Still suffering from shock, a strange, disturbing discovery in her mother's house leads her to a Welsh village - a place haunted by its own past, where 23 years earlier a young girl disappeared without trace. The secrets Matilda uncovers threaten to unravel her identity.

Requiem arrives as a six-part series with a behind-the-scenes special feature on DVD on 12th March 2018.

DVD
Quiz, the extraordinary and sensational story of how Charles and Diana Ingram attempted an 'audacious heist' on the quiz show 'Who Wants to Be a Millionaire?', is available to buy on DVD on 15th June ... END_OF_DOCUMENT_TOKEN_TO_BE_REPLACED
Hot PicksView