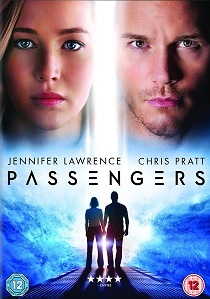 Academy Award winner Jennifer Lawrence (Best Actress, Silver Linings Playbook, 2012) and Chris Pratt (Guardians of the Galaxy) are among the 5,000 passengers who decided to board the Avalon spaceship for a 120-year journey that offers them the opportunity to wake up in a new century, on a new planet. However, the trip takes a deadly turn when their hibernation pods mysteriously wake them 90 years before they reach their destination. Passengers also stars Michael Sheen (Twilight franchise) and Academy Award® nominees Lawrence Fishburne (Best Actor, What's Love Got to Do with It, 1993) and Andy Garcia (Best Supporting Actor, The Godfather: Part III, 1990).

The 4K Ultra HD, Blu-ray, DVD and digital releases of Passengers bring fans all the behind-the-scenes action with three featurettes, plus "Outtakes from the Set". In "Casting the Passengers", the cast and filmmakers provide insight into the joys and challenges of populating a ship built for thousands, with four key players. Guy Hendrix Dyas, nominated for the Academy Award® for Best Achievement in Production Design for this film, takes audiences through the impressive sets constructed to represent The Avalon in "Creating The Avalon"; while fans step onto the set for an unforgettable visit in "On Set with Chris Pratt". The Blu-ray and digital releases of Passengers include additional exclusive material, including deleted scenes and the featurette "Space on Screen: The Visual Effects of Passengers", a deep dive on the effects used in the zero gravity pool scene. The Blu-ray and DVD also offers a first look at the Passengers Awakening Virtual Reality Experience.

Jennifer Lawrence and Chris Pratt star in a high-stakes adventure about two passengers, Aurora and Jim, onboard a spaceship transporting them to a new life on another planet. The trip takes a deadly turn when their hibernation pods mysteriously wake them 90 years before they reach their destination. As they try to unravel the mystery behind the malfunction, they discover that the ship itself is in grave danger. With the lives of 5,000 sleeping passengers at stake, only Jim and Aurora can save them all.