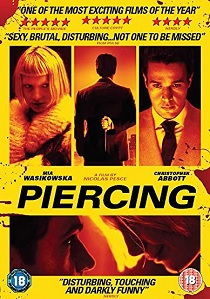 Based on the critically acclaimed cult novel by Ryû Murakami, the psycho-sexual horror Piercing is released on DVD 29th April 2019 from Kaleidoscope Home Entertainment.

Reed (Christopher Abbott) sets off on a business trip and kisses his wife and baby goodbye. But in lieu of a suitcase filled with clothes, he's packed a toothbrush and a murder kit. He meticulously plans everything out. He checks into a hotel and plans to kill an unsuspecting victim in order to quench his devious impulses.

However, Reed gets more than he bargained for with Jackie (Mia Wasikowska), an alluring call girl who arrives at his room. First, they relax and get in the mood, but when there's an unexpected disruption, the balance of control changes between the two and a feverish nightmare unfolds.

DVD
From the 1870s through to modern day, Radioactive, released on DVD 27th July 2020 from StudioCanal, is a journey through Marie Curie's enduring legacies - her passionate partnerships, scientific ... END_OF_DOCUMENT_TOKEN_TO_BE_REPLACED
Hot PicksView