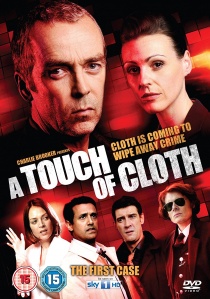 Based on a true story by Boris Starling (Messiah) and written by Charlie Brooker (Dead Set, Black Mirror) and Daniel Maier (Harry Hill's TV Burp), A Touch of Cloth is a laugh-out-loud detective spoof starring John Hannah (Spartacus, The Mummy), Suranne Jones (Coronation Street, Unforgiven) and Julian Rhind-Tutt (Green Wing, The Hour). Out to own on DVD from 3rd September 2012 from 4DVD.

In this all-encompassing parody of every police procedural ever written, John Hannah plays DCI Jack Cloth - a maverick, heavy-drinking loner who has thrown himself into his work following the mysterious death of his wife. The damaged, haunted Cloth is teamed with plucky no-nonsense sidekick DC Anne Oldman, played by Suranne Jones.

Together the pair investigate a series of increasingly grisly murders and find themselves on the trail of a devious killer. As you do. If you're a detective. The case leads Cloth and Oldman from leafy forests to sinister lock-ups, from the luxury home of an arrogant TV chef to the cold dissection rooms of a vampish forensic pathologist, packing in as many jokes as humanly possible along the way. Their boss repeatedly demands results, fast. No, faster than that. Faster! Slow down. Not that much. Hold it there. Yeah, precisely that fast...