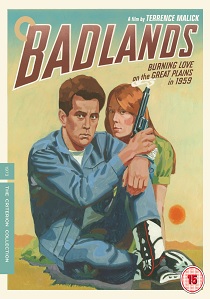 With a new digital restoration, Badlands, Terrence Malick's exquisite first film, is given the Criterion treatment by Sony Pictures Home Entertainment and released on Blu-ray 20th May 2019.

Badlands announced the arrival of a major talent: Terrence Malick. His impressionistic take on the notorious Charles Starkweather killing spree of the late 1950s uses a serial-killer narrative as a springboard for an oblique teenage romance, lovingly and idiosyncratically enacted by Martin Sheen and Sissy Spacek.

The film introduced many of the elements that would earn Malick his passionate following: the enigmatic approach to narrative and character, the unusual use of voice-over, the juxtaposition of human violence with natural beauty, the poetic investigation of American dreams and nightmares.

This debut has spawned countless imitations, but none have equalled its strange sublimity.

Related Articles
Sleeping Dogs, Bring Me The Head Of Alfredo Garcia, The Hired Hand
Carrie: Limited Edition, JFK : Director's Cut, Get Low, Four Christmases, Blast from the Past, The Ring Two, The Old Man and The Gun, Castle Rock: Season 1
Anne of Green Gables, Badge Of Honour, Amazonia, Grace And Frankie: Season 1, Badge Of Honour, Fighter, The Double, The Amazing Spider-Man, The Way, Apocalypse Now: Full Disclosure Edition, Apocalypse: The Second World War, The Departed, Who Killed the Electric Car?, Catch Me If You Can, Catch Me If You Can, The West Wing: Season 7, Apocalypse Now - Final Cut
Knight of Cups, To The Wonder, The Tree Of Life, The Thin Red Line, The Tree Of Life: The Criterion Collection
Comments
3D-BD Releases News Pick