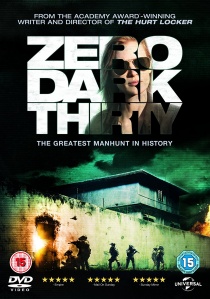 For a decade, an elite team of intelligence and military operatives worked in secret across the globe, devoting themselves to a single goal: to find and eliminate Osama bin Laden. The critically acclaimed action thriller Zero Dark Thirty reunites director Kathryn Bigelow and writer Mark Boal - the Academy Award®-winning team behind The Hurt Locker and brings together an all-star cast lead by rising star Jessica Chastain. The story of history's greatest manhunt for the world's most dangerous man is released on Blu-ray and DVD complete with UltraViolet on 10th June 2013, courtesy of Universal Pictures (UK).

The hunt for Osama bin Laden preoccupied the world and two American presidential administrations for more than a decade. In the end, it took a small, dedicated team of CIA operatives to track him down. Every aspect of their mission was shrouded in secrecy and many of the most significant parts of the intelligence operation are brought to the screen for the first time in this heart-pumping and gripping film. The account of bin Laden's pursuit and capture, vivid yet faithful to the facts, takes you inside the hubs of power and to the front lines of this historic mission, culminating in the special operations assault on a mysterious, suburban Pakistani compound.

Zero Dark Thirty was honoured with a Golden Globe® for Best Performance by an Actress in a Motion Picture and received an incredible five Oscar® and five BAFTA® nominations. With Blu-ray special features including four featurettes about how the film was made, don't miss the opportunity to make this adrenalin-fuelled action thriller part of your collection.

DVD
Will Smith and Martin Lawrence are back on the case in the roles that launched the dynamic duo to global superstardom in Bad Boys For Life, arriving on DVD, Blu-ray and 4K UHD 25th May 2020 from Sony ... END_OF_DOCUMENT_TOKEN_TO_BE_REPLACED
Hot PicksView