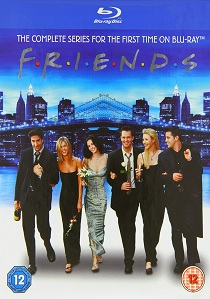 Just in time for Christmas, Warner Home Video will release for the first time ever Friends: The Complete Series Blu-ray on 12th November 2012. This ultimate collector's set for the ultimate fan features over 110 hours of content - including all 236 original broadcast episodes released for the first time in the UK, plus 20 hours of special features including over three hours of newly-added special content.

New content includes a retrospective documentary with new interviews looking back at the influential 10 years of the series, never-before-released cast appearances, unaired footage, a new gag reel and more! All 10 seasons have been completely remastered in stunning 1080p high definition video with a 16x9 widescreen format and 5.1 audio. The Friends: Complete Series Blu-ray box set is presented in highly collectible new packaging consisting of a premium foiled slipcase that holds 21 Blu-ray discs, plus a 64-page episode guide.

Friends is an American sitcom about six friends struggling to survive on their own in Manhattan. In each episode, they find the companionship, comfort and support from each other to be the perfect solutions to the pressures of everyday life. The series stars 'The Ones That Were There For You' for ten seasons strong: Jennifer Aniston as "Rachel Green", Courtney Cox as "Monica Geller", Lisa Kudrow as "Phoebe Buffay", Matt LeBlanc as "Joey Tribbiani", Matthew Perry as "Chandler Bing" and David Schwimmer as "Dr. Ross Geller".

Over 3 Hours of All-new Special Features