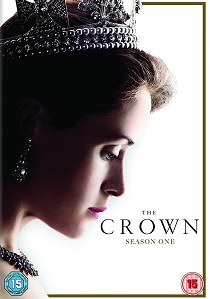 Starring Claire Foy (TV's Little Dorrit and Wolf Hall), whose portrayal of Queen Elizabeth II in the series won her a Golden Globe® Award, Matt Smith (TV's Doctor Who, Terminator: Genisys) as the Duke of Edinburgh, Vanessa Kirby (Me Before You, Everest) as Princess Margaret, Jared Harris (TV's Mad Men, Sherlock Holmes: A Game Of Shadows) as King George VI, and John Lithgow (Interstellar, Rise Of The Planet Of The Apes) as Winston Churchill, the series takes a sumptuous look at the early part of the Queen's reign and the circumstances that lead to it.

Also starring Dame Eileen Atkins (TV's Upstairs, Downstairs, Gosford Park), Victoria Hamilton (Victoria & Albert, Mansfield Park), Harriet Walter (The Sense Of An Ending, Atonement), Jeremy Northam (Eye In The Sky, Glorious 39), Greg Wise (Blackwood, Effie Gray) and Ben Miles (Woman In Gold, V For Vendetta), The Crown: Season One covers the period from Queen Elizabeth II's marriage to the Duke Of Edinburgh through to the disintegration of Princess Margaret's engagement to Peter Townsend, charting how a princess truly becomes a Head of State. The Blu-ray and DVD sets will also include a full photo gallery of stills from the filming of Season One.

Produced by Left Bank Pictures, whose recent TV credits include the critically acclaimed The Replacement and The Halcyon, The Crown's incredible pedigree in front of the camera is matched by the talent behind the scenes. Creator Peter Morgan (The Queen) is joined by a team of directors, whilst the teams responsible for costume design and visual effects each brought home an award each at this year's TV BAFTAs®. The series is executive produced by Peter Morgan, Stephen Daldry (The Hours), Andy Harries (The Queen), Philip Martin (TV's Prime Suspect 7: The Final Act), Suzanne Mackie (TV's Mad Dogs, Calendar Girls), Matthew Byam Shaw (Frost/Nixon), Robert Fox (Atonement), Tanya Seghatchian (Harry Potter and the Goblet of Fire), Nina Wolarsky (Argo) and Allie Goss (TV's Daredevil).

The Crown: Season One Blu-ray and DVD will include a full gallery of unit photography. The season will also be available on Blu-ray and DVD as a Platinum Edition Box Set. Presented in premium packaging, this includes a reproduction of an article from The Times from the day of the Queen's Coronation, 2nd June 1953, along with a House of Windsor family tree art card, an exclusive collector's coin and the first chapter of The Crown: The Inside History by Robert Lacey.

The Crown focuses on Queen Elizabeth II as a 25-year-old newlywed faced with the daunting prospect of leading the world's most famous monarchy while forging a relationship with legendary Prime Minister, Sir Winston Churchill. The British Empire is in decline, the political world is in disarray, and a young woman takes the throne....a new era is dawning.

Peter Morgan's masterfully researched scripts reveal the Queen's private journey behind the public facade with daring frankness. Prepare to be welcomed into the coveted world of power and privilege and behind locked doors in Westminster and Buckingham Palace....the leaders of an empire await.

DVD
Sam Mendes, the Oscar®-winning director of Skyfall, Spectre and American Beauty, brings his singular vision to his World War I epic, 1917 to DVD, Blu-ray and 4K Blu-ray 18th May 2020 from ... END_OF_DOCUMENT_TOKEN_TO_BE_REPLACED
Hot PicksView